So today I looked at my to-do list, and it only had 18 things on it. So I decided that I should blog. (Blogging actually was on my to-do list…but anyways…)

When I went to blog I got so excited because I realized that I am at Number 20! I thought,

“Yay! I have successfully posted 20 reasons to smile!” Then I realized that I actually haven’t. Somehow I forgot post number one.

Seriously, who forgets the number one? No one. 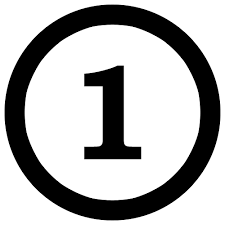 No one forgets this number

So, in order to help my memory, I decided to Google the history of “1.” (Incidentally do you know if you Google “history of the number one” with the Google search engine set to ‘Images’ you will end up with a bunch of pictures of Rihanna?)

However if you Google the right way, or just use Wikipedia, you learn this:

The glyph used today in the Western world to represent the number 1, a vertical line, often with a serif at the top and sometimes a short horizontal line at the bottom, traces its roots back to the Indians, who wrote 1 as a horizontal line, much like the Chinese character 一.

(And I know I’ve said before that I don’t necessarily trust Wikipedia, but I didn’t want to read some book called The History of the Origins of Numbers or something like that.)

So there, since the Indians, people have been remembering the number one. But you have the misfortune of reading a blog where the author does not. I’m sorry. =) I have been deceiving you all along.

But never fear. I will create another Special Edition post and call it Number One. And now, I am off to finish my 17-item long checklist. (Yea, I forgot to put a number one on that too. *sigh*)

This entry was posted on October 17, 2011 by Abigail in 101 Reasons to Smile and tagged Google, history, Number One, Rihanna, wikipedia.