I am a person. And like most people I get obsessed with things. Quite easily.

Well, you already know about my long term love affair with sleep, but I guess that’s kind of normal.

Then there was the time my grandma told me I look like Kate Middleton. And that started off another obsession. In fact, my Kate-obsession was kind of the reason I started this blog. Which is a long story in and of itself. 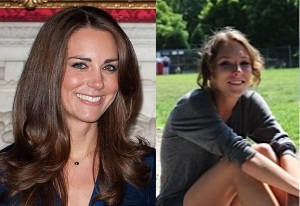 Yea...I dont really see it. But thanks Grandma! =)

And when everyone switched over to being a fan of Pippa, I stayed faithful to Kate. I guess I feel a kind of kinship with her, not because of our supposed resemblance, but because we’re both big sisters. 🙂

I was also briefly obsessed with cleaning and vacuuming the house when I was about ten years old. Unfortunately, my mother doesn’t remember this stage and vehemently denies it ever happened. But it did!

So, what’s my latest obsession you ask? Well, I think it is the weirdest one yet. I am obsessed with brushing my teeth. Me and this chick would get along great!

It’s not that I brush my teeth more carefully than I used to, or for longer periods of time than I have in the past. It’s just that I do it more often.

I have brushed my teeth 2 times already today and it’s not even ten o’clock. It’s weird. But fun. And it makes my mouth feel really clean.  And my teeth really white.

And like I said before, it’s really fun. I guess that’s why I do it. 🙂

This entry was posted on January 12, 2012 by Abigail in 101 Reasons to Smile and tagged brushing my teeth, kate middleton, obsession.

A true friend is someone who thinks that you are a good egg even though he knows that you are slightly cracked. — Bernard Meltzer
Loading Comments...
%d bloggers like this: